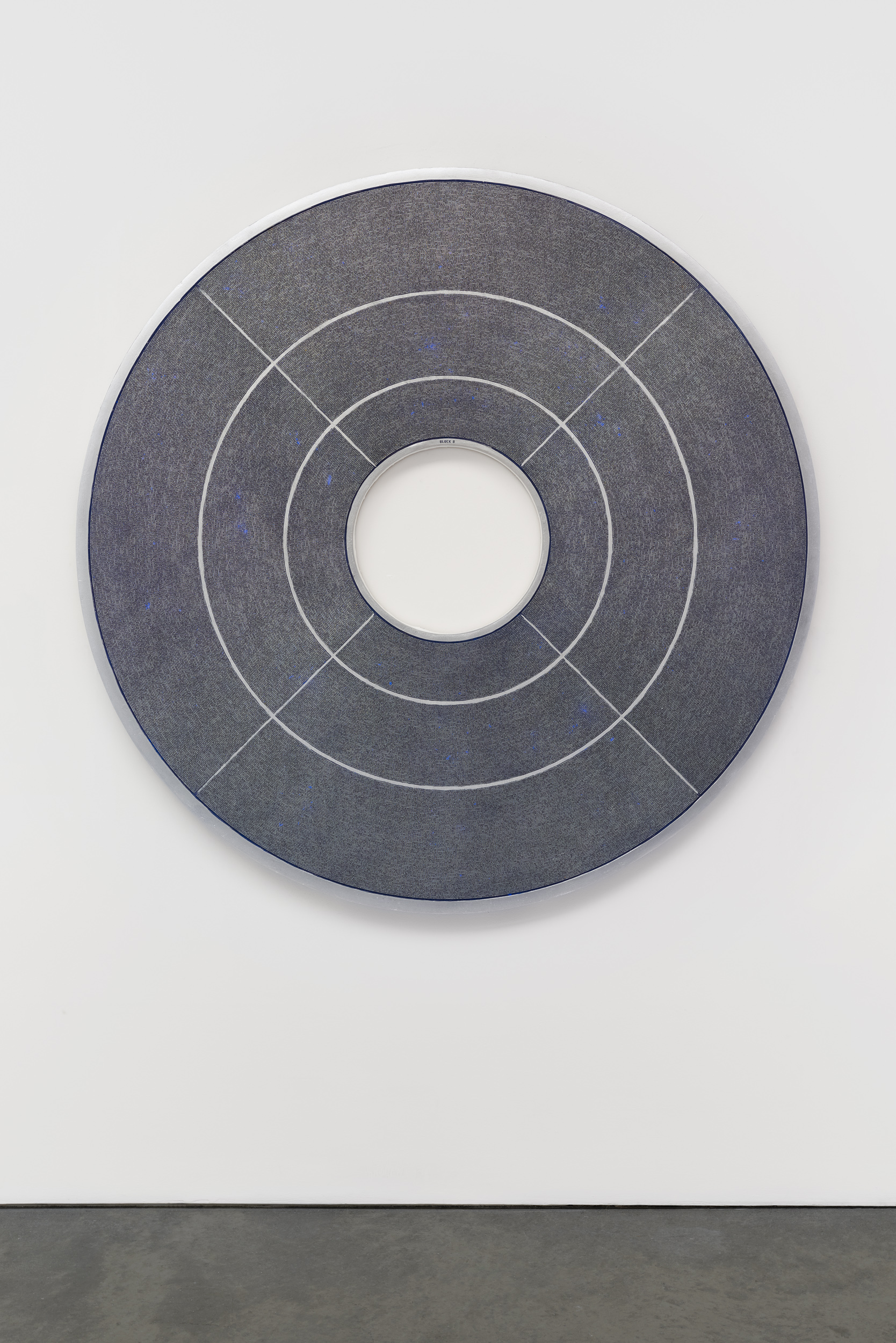 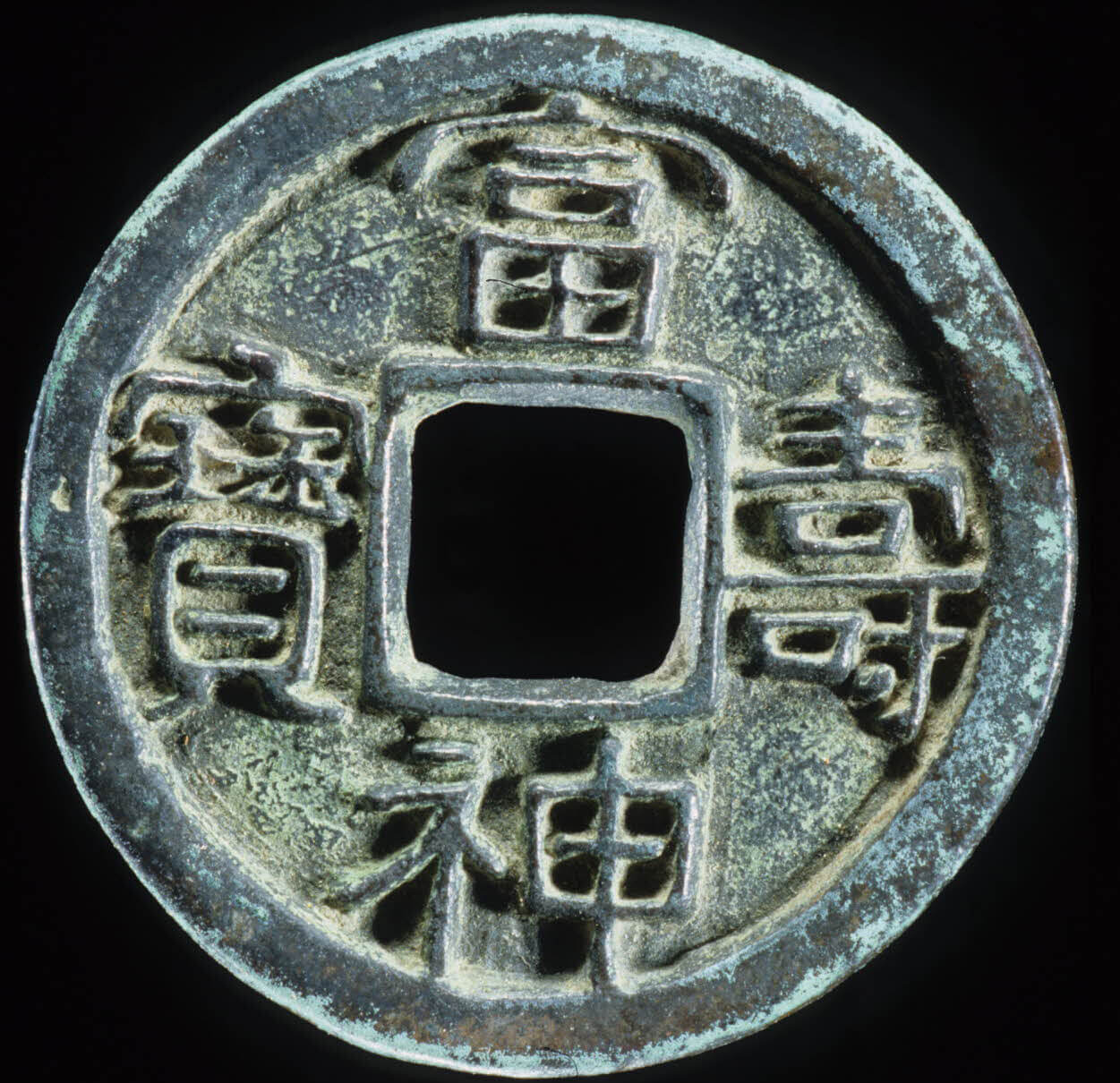 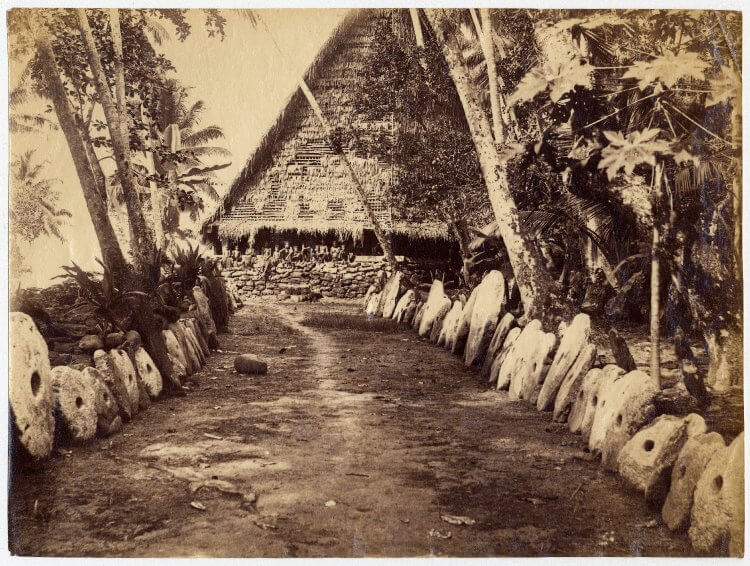 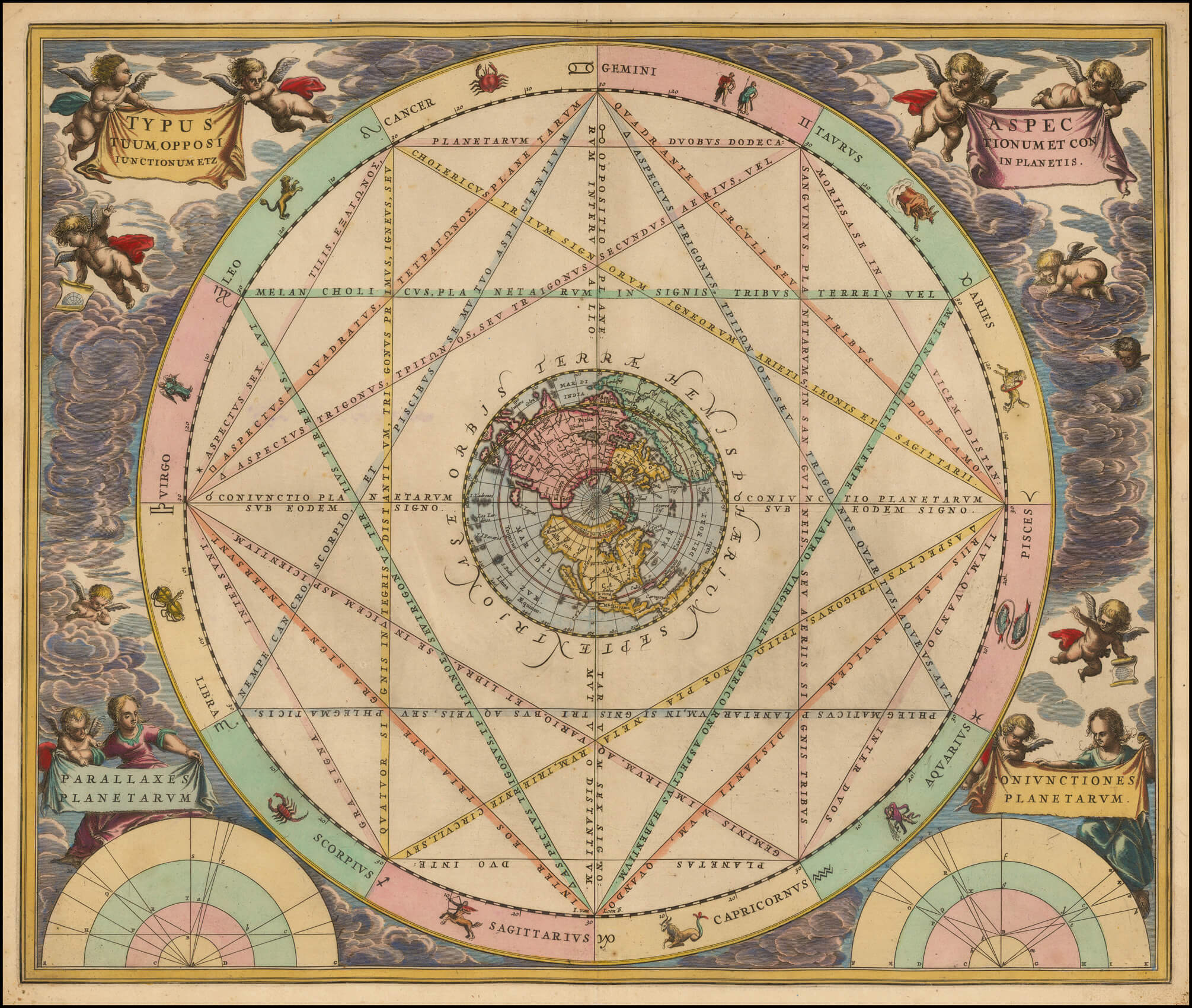 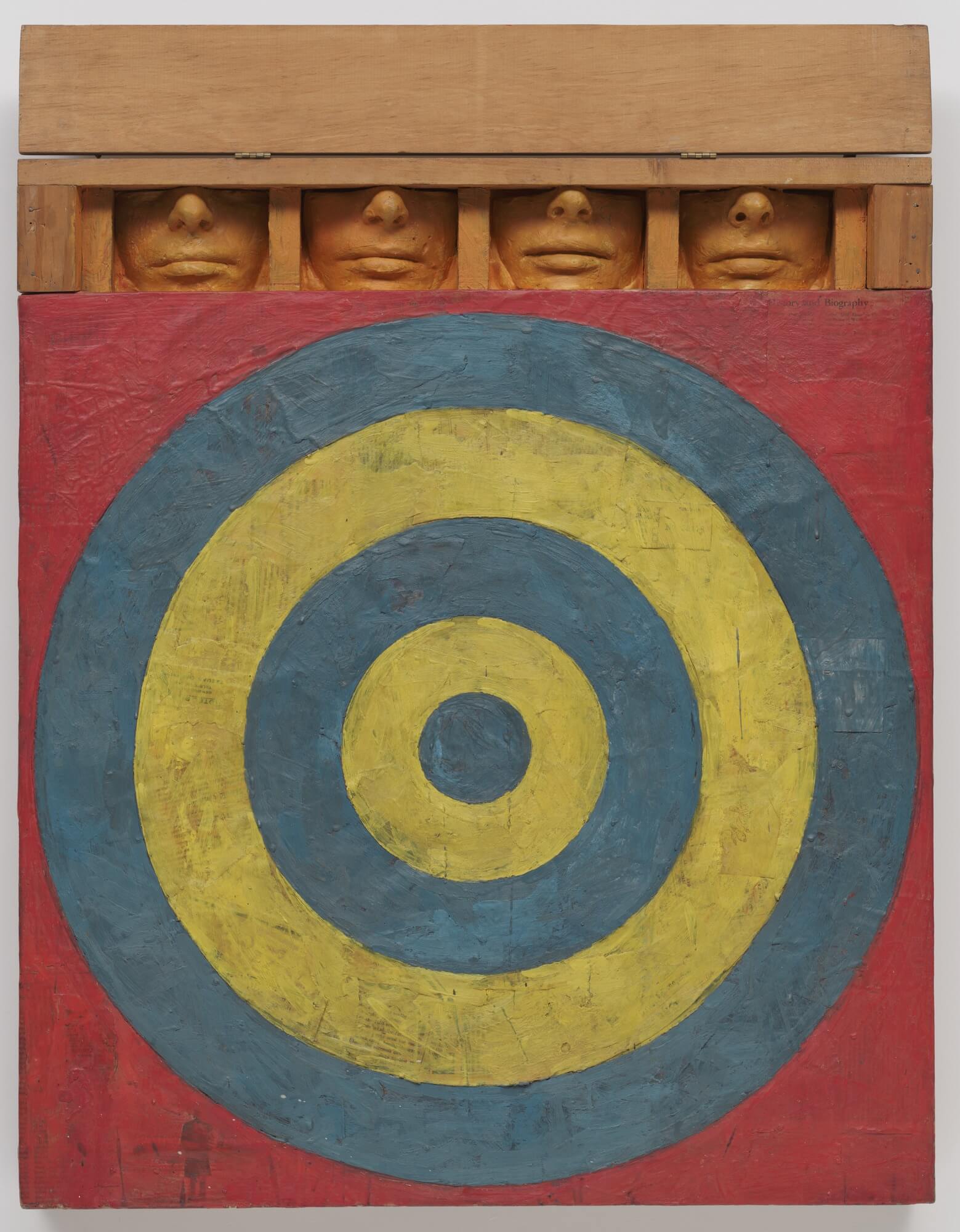 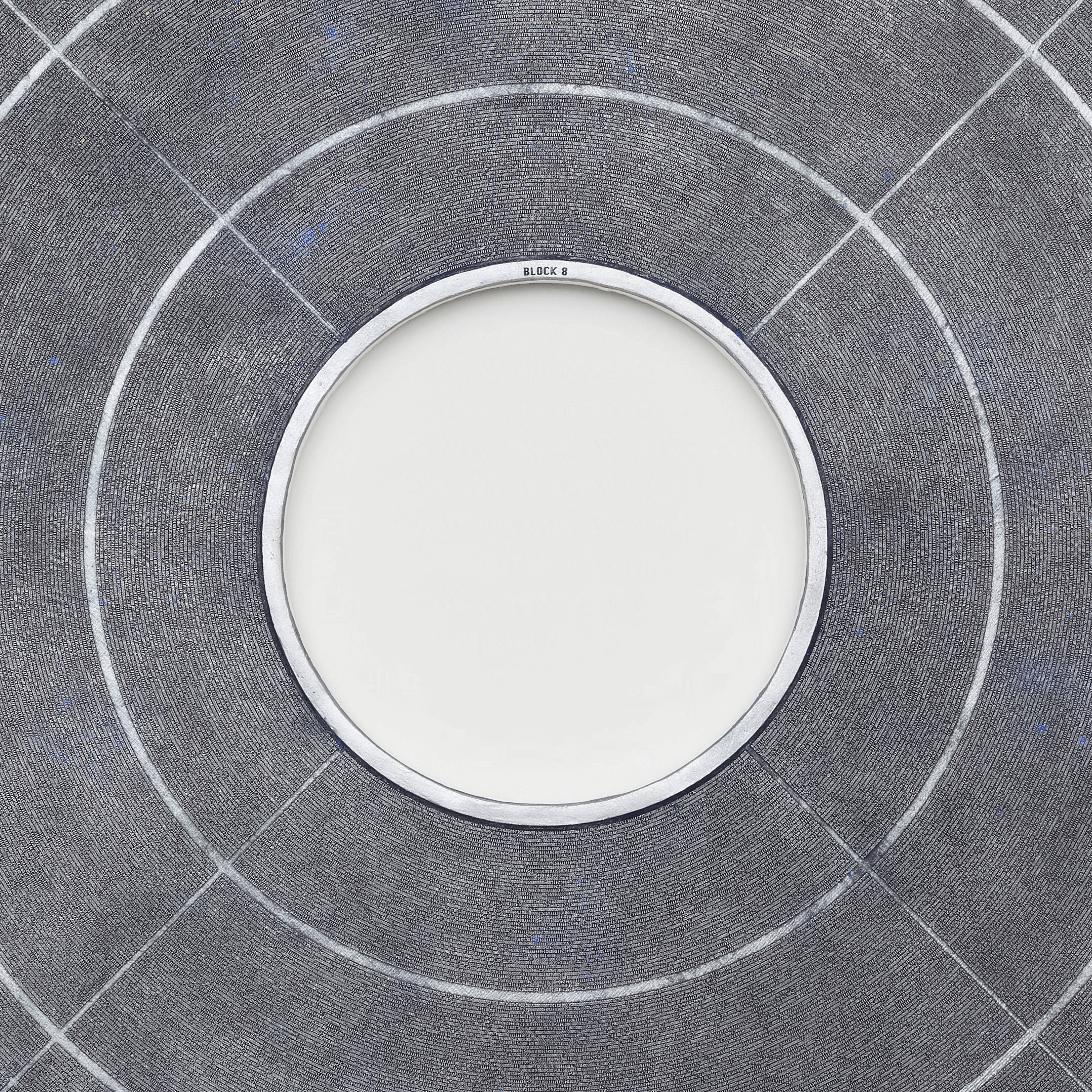 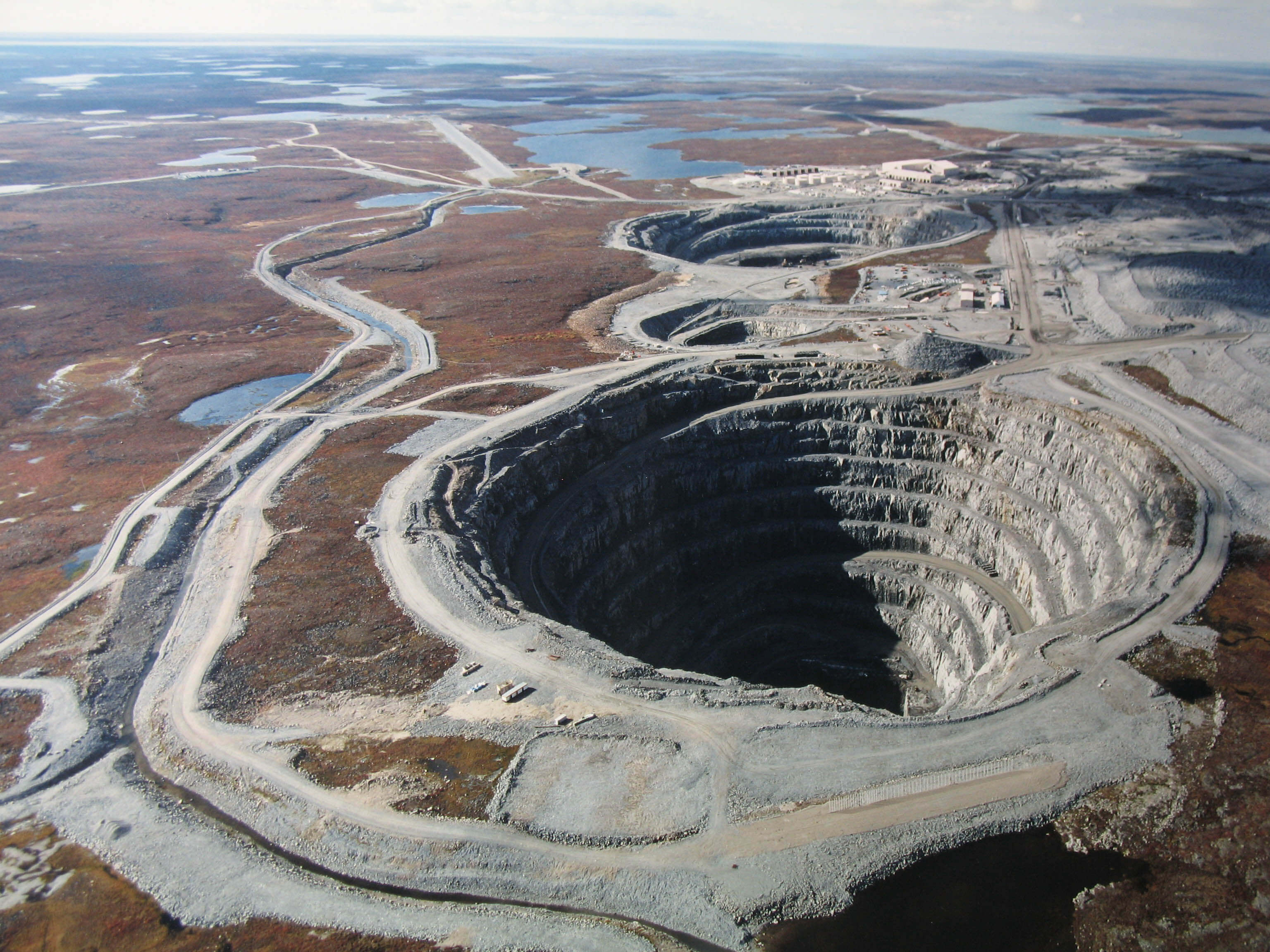 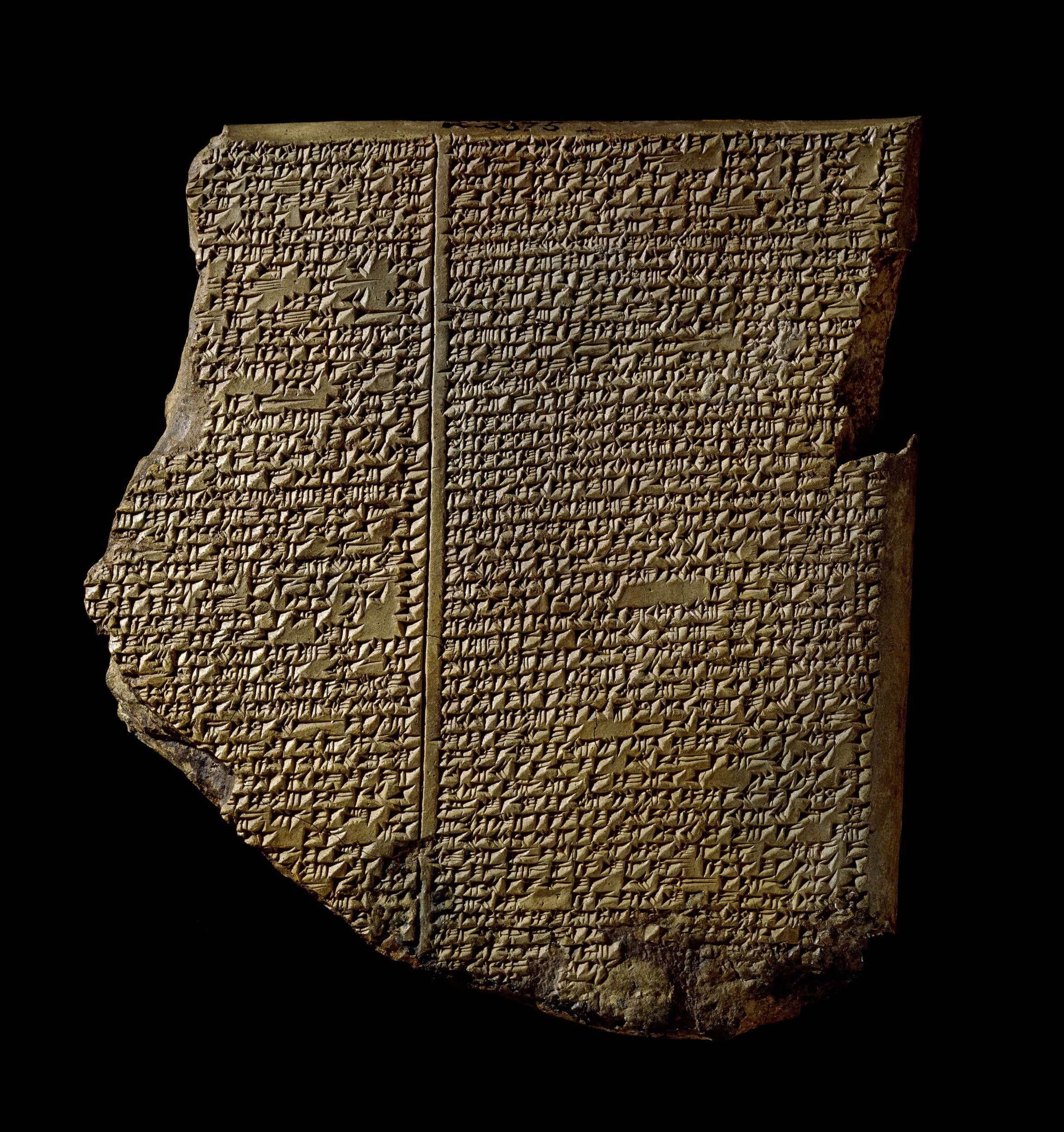 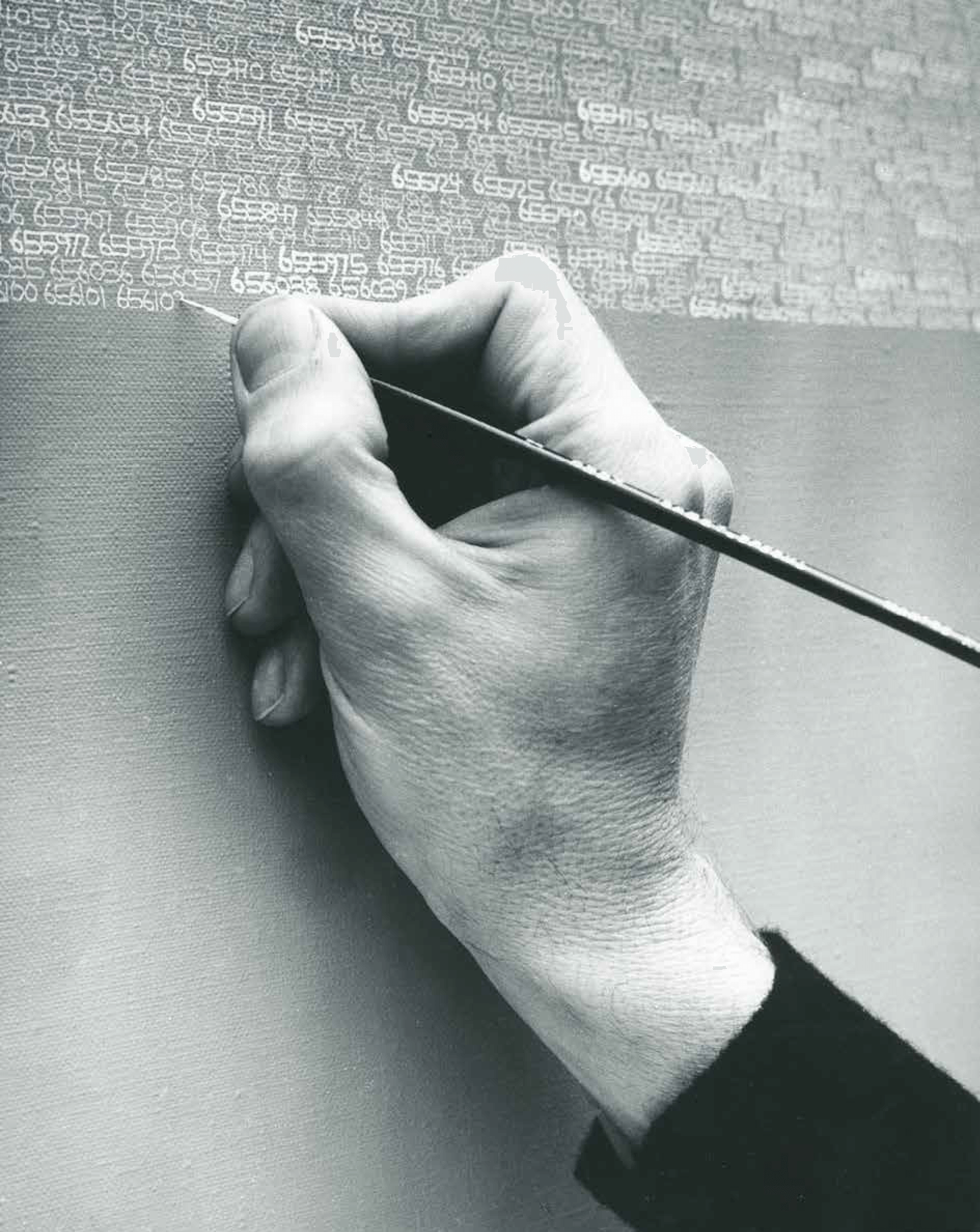 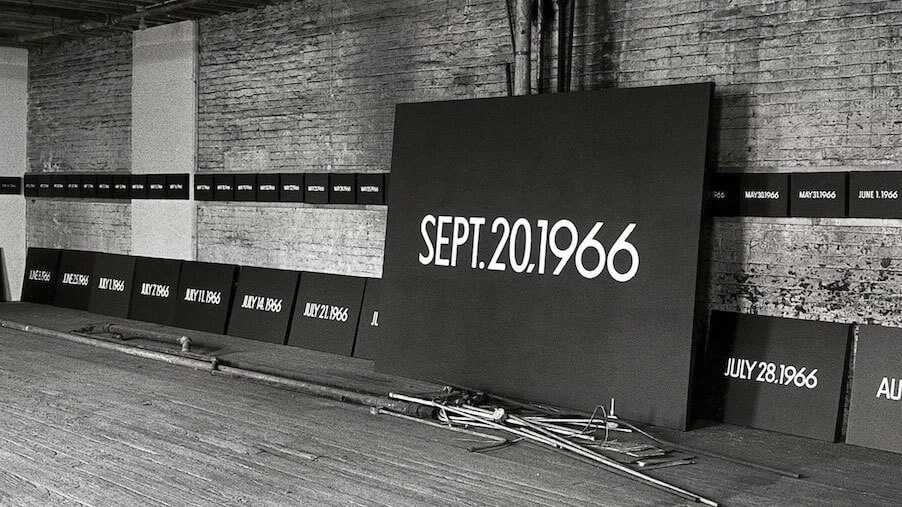 I am still alive
On Kawara
‍
The nature of Bitcoin is such that once version 0.1 was released,
the core design was set in stone for the rest of its lifetime
Satoshi Nakamoto
‍
Emanating out from the void in the center of the work (Fig. 1), 322,048 digits of hexadecimal code arc across the surface of the painting. Like the ever increasing circular broadcasts of a beacon, a mass of letters and numbers radiate out of the confines of the canvas. A constellation of 32 gold-encrusted digits lie hidden amongst the mass of code, catching the viewer’s eye before tantalisingly disappearing again.

Portraits of a Mind is one artist’s response to the inevitability of digital degradation, to the idea of this founding code as a now historic text, and to the story of Bitcoin. A digital fingerprint carved out of paint, Portraits of a Mind is a reflection on the nature of identity in our newly decentralised age. A portrait of Satoshi Nakamoto, the work explores the politics and aesthetics of open source code and its relationship to identity and truth. The work not only examines the founding code for traces of Nakamoto’s identity, but also for the identity of Bitcoin itself. Mining the visual histories of cryptography, cartography and coinage, the work encases the code in shapes and forms that draw attention to Bitcoin’s essential ties with the past, opening up new perspectives on blockchain technologies while tracing the origins of where they came from.

Recalling ancient Japanese coinage (Fig. 2), rai stones (Fig. 3), cipher wheels, early astronomical (Fig. 4) and cartographic charts, it is at first the circular form of the work that captures the imagination. Drawing on this visual language, the form of the shaped canvas opens up space to consider Bitcoin’s  essential ties to the past instead of the perpetuated perception of its radical severance with it. Intersected by a pair of crossed lines and further circular bands engraved into the paint, the work evokes the iconic target paintings (Fig. 5) of American artist Jasper Johns (b. 1930), themselves meditations on the nature of visual and semantic encryption. An allusion to cryptography’s long standing association with warfare, the target - aiming through the code - also performs a parallel function - the act of searching for, or closing in on an individual or location. The target becomes a structure through which to locate identity. Reflecting on the essential fallacy of painting anonymity, each painting itself is physically decentralised - there is no center. Instead, a void (Fig. 6). An empty space in the place of the dynastic portraits that have adorned coinage for millennia. The target lines are interrupted. An X is never formed. No one is found. The identity of Satoshi Nakamoto, encased by their code, remains elusive.

Drawing closer, the viewer encounters hundreds of thousands of intricately engraved digits raised out of the surface of the paint. Anonymous, unknowable, unreadable, the seemingly unending string of alphanumeric digits evokes ciphers both ancient and modern. Mined out of the surface of the paint, this code is a digital landscape made physical. Topographic in nature, it recalls the relief engraving found on minted coins but perhaps more pertinently the act, shape and form of mining (Fig. 7). Glinting across the surface of the canvas like newly unearthed deposits of gold ore, the constellation of gold digits held within the mass of code reinforces the idea of mine in the viewer’s eye. Resource intensive proof-of-work processes are visualised through the aesthetics on which they were modelled - rare metal mining. Gold digits, algorithmically unearthed, become metaphors for bitcoins past, present and future.

And yet perhaps the gold digits speak not just to treasures that lurk below the surface of the earth and also those oldest of decentralised networks above us - stars. Networked across the surface of the painting, seeking out those gold digits our eyes trace the lines of the now iconic Rand Corporation diagram (Fig. 8) on decentralisation. This network composition stretching across the canvas is a microcosm for the wider globally decentralised network of 40 paintings that constitutes Portraits of a Mind.

It is with this idea of network structures both within each canvas and between all paintings, that the work turns. From a target-like form drawing the eye into the center to a work read from the centre out. Target signs become beacons. A honing in turns to an emanating out. This sense of the broadcasting of the code outside of the confines of the painting draws up in mind’s eye the presence of the other thirty-nine paintings in Portraits of a Mind’s network. In turn, drawing us to an essential truth surrounding decentralisation - that each painting, or node, is but a fragment of a larger democratic whole.

The idea of fragment not only suggests the presence of others but is visually suggestive of both history and time and its record of it - all central pillars of blockchain technology. Indeed, in its transcription of the code: the idea of ‘making a complete written record’ is a central tenant to the intellectual and aesthetic underpinnings of the work. Drawing on the aesthetics of cuneiform tablets (Fig. 9) and ancient steles, the representation of the code recalls both the visual qualities of historical documents and recasts Nakamoto’s original code as a Rosetta Stone for the contemporary period. This act of physical transcription of digital code attempts to draw parallels between the cultures of the past and the technology of our future, drawing emphasis on continuity in the face of radical progression in mediums of record keeping - from ancient clay tablets to the immutable records of blockchains.

The art of the written record finds no greater match than in the work of Polish conceptual artist Roman Opalka (1931-2011). His seminal work 1965 / 1 – ∞ (1965-2011) was a lifelong project to paint the numbers 1 to infinity (Fig. 10), themselves a form of portraiture and as well a record of time itself. The work carries many prescient similarities to the structure of blockchain technologies - their narrative consecutive structure, their indexing of time, their decentralisation through distribution, their insistence on the power of text as code, their potential for infinity. It was a project matched perhaps only by work of Japanese conceptualist On Kawara (1932-2014) who married an interest in cryptography with another early set of blockchain projects, the Date paintings (Fig. 11). Portraits of a Mind  in its own blockchained structure seeks to reshine a lens on these early blockchain artists and pioneers, resurrecting their conceptual structures for a newly decentralised age.